Imagine not having access to clean drinking water because you refused to vote for a particular politician, or didn’t pay bribes to the driver delivering your supply. Even after doing both these things, you're still not sure just exactly when the next delivery will arrive.

This is the case in India, where access to drinking water is not universal. As India increasingly urbanizes and water becomes even more scarce, solutions that raise access will be more important in the coming decades.

That's why the Piramal Foundation -- which addresses India’s development challenges through social ventures -- funded Sarvajal, a company that uses cloud technology to provide water via filtration stations and solar-powered ATMs.

UNICEF reports that water-borne diseases such as cholera, gastroenteritis and diarrhea in India are responsible for $600 million in medical bills and lost productivity per year, but it could get worse. The national government estimates that demand for clean water will rise 50 percent by 2031 if current delivery models stay the same. According to the World Bank, 220 million Indians will migrate to cities over the same 20-year period.

In rural areas, residents often have no other choice than to capture groundwater.  "The water was brackish, there were no pipes, no tankers, and filters were too expensive," said Anand Shah, former head of the India-based Piramal Foundation, of the lack of access. "They’d sift it but would still have large amounts of kidney stones, joint pain, arthritis and gastrointestinal problems.” Plus, the reverse osmosis process to desalinate and filter out impurities was inefficient. 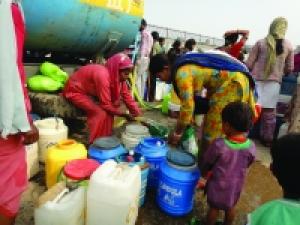 In urban slums, the situation can be better, but not optimal. Although tankers arrive to dispense water for free, they're intermittent and unpredictable, Shah said. Residents invest large amounts of time pursuing the tanker, jostling to fill containers they carry home. And even if the driver has the best intentions, the country's rough roads lead to unexpected roadblocks.

Through a monitoring device attached to each filtration unit, embedded sensors and an RFID reader, Sarvajal tracks water quality in real time. It follows user activity, how many times the water has been backwashed and rinsed, when filters need changing, how much water a station has dispensed and how many times the power went out.

Service and maintenance were costly, so a monitoring device was built in-house allowing the company to diagnose machines from one central location. 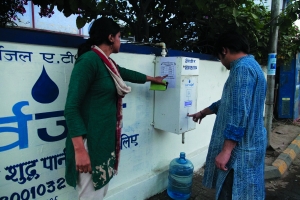 The company grew from one pilot location in 2007 to more than 200 filtration station-ATM combos in villages of at least 5,000 people each across India. One resident per village can purchase a franchise for about 30,000 Indian rupees, about $500, and sell the filtered water for a penny per liter, he said.

Users pre-pay for their water, and funds are loaded onto Sarvajal ATM cards.

Shah said he realizes that selling water in a country that has offered water as a public resource could appear off the mark. But delivery via the tankers is unpredictable, and it takes families time to collect water from the tankers and filter it at home.

“We looked at every alternative out there, and even if a family buys the cheapest water filter, we’ve priced it still under what it would cost them per liter,” he said. Bottled water costs 32 cents and water pouches 14 cents per liter on the street, and creates more waste than refilling reusable containers.

According to Shah, local franchise owners can earn a good living -- up to two to three times what they would make for unskilled labor. While Sarvajal still owns the water filtration equipment, it takes less than a year for the franchise owners to start returning profits, he says. Sarvajal, on the other hand, doesn't expect to profit for another five to 10 years.

Shah says Sarvajal launched as a for-profit company in part because a non-profit would have a harder time attracting technical talent.

Scaling into urban areas – with some help 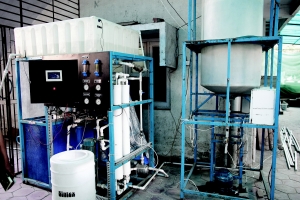 Sarvajal has secured the go-ahead from the local government in the metropolitan area around New Delhi to set up some 50 filtration station-ATM units -- areas without regular access to drinking water.

Because Sarvajal mostly had operated in more rural areas, it needed help. To that end, the company hired Frog Design, a consultancy that engineers and designs products and services in energy, health care and social innovation.

Jan Chipchase, Frog’s creative director of global insights, set up a  team of staffers from India. They spent over a month in Delhi interviewing and observing how residents navigated securing drinking water. The group also spoke to water providers who had opened businesses related to supplying clean water.

Savda Ghevra, a resettled slum on the edge of Delhi, was the focus of the research. Frog wanted to find out the value of clean drinking water, how a delivery system would meet residents’ needs and what might arise during the implementation of an alternative system. (The extended research was funded by the Institute of Money, Technology and Financial Inclusion at the University of California-Irvine).

“A water ATM allows stored value to convert to digital credit. As the world digitizes, we wanted to find out to what extent a low literate community was willing to invest in these types of technology,” said Chipchase.

Using digital tools to store value in less developed countries is not unheard of, says Chipchase, who cited Kenya as a country where much of the population banks online.

As a result of their research – detailed in a report, "Journeys for Water" released Tuesday – Frog concluded that in the context of the current water delivery model for Savda Ghevra, the “belief that water is a right and should be free is moot. In the slum residents pay for their water in one way or another – with time and money, with their ability to move and make political choices based on their interests."

“It’s realizing that the current practice of water tankers isn’t working from a social and practical perspective,” Chipchase said. “This project is far more about understanding politics and economics in the broader sense.”

But Frog found that despite all the advanced technology enabling a water delivery system such as Sarvajal’s to exist in a country lacking adequate infrastructure, it must give residents some ownership and control for the system to be sustainable.

Shah said his team estimates that Sarvajal needs to scale to 1,000 to 1,500 locations to break even.

Chipchase said Sarvajal is a perfect example of how “reverse innovation” is taking place through combining “mature” technologies such as the mobile telephone system, RFID tags and sensors. “The ability to prototype is becoming mainstream. It’s not just Silicon Valley anymore.”

Shah is a CalTech and Harvard-educated Indian-American who grew up in Houston, then spent 13 years in India after college, yet most of the 120 employees at Sarvajal are Indian nationals. His team of 25 engineers developed the filtration system’s monitoring device, coined the Soochak.

Coin-operated water filtration stations exist in Vietnam and Thailand. Yet Sarvajal's pairing of cloud-based monitoring and an ATM service appears to be unique.

Capital returns should be secondary

Shah has been contacted by the Indian division of water giant Pentair and an array of venture capitalists about potential investments. But after learning more about the company's timeline for return, he said, they lost interest. The same thing happened, he said, with larger companies interested in moving into the space themselves.

“My response to them was you’re asking the wrong question – you should be asking how long it’s going to take to solve the problem,” he said. “We’re in this to solve the problem, not for money to be made. Things like water -- where innovation hasn’t happened in 50 years – these are really big opportunities to think about them freshly from a new perspective. Returning capital should be a byproduct or a secondary [outcome].”

Top image of flowing water by PhotoSky via Shutterstock. Other photos courtesy of Frog Design.

Where the trash cans go moo

The Human Kidney: Inspiration of and Solution to the Water Crisis