When it comes to the use of food metrics, Del Monte Foods is on full tilt.

Thanks to pressing sustainability needs and limited natural resources, increasing reliance upon metrics for the food and agriculture sector is gaining ground in the United States. Helping to lead the way is Del Monte Foods, which is using detailed metrics to measure the effectiveness of everything from energy to water to waste.

During a discusssion at the GreenBiz VERGE SF 2013 event last week, experts including Robin Connell, manager of sustainability programs at Del Monte Foods, discussed how the use of food metrics is expanding among companies and growers. Food metrics are data-driven measurement tools that can help companies and suppliers reduce waste, improve air quality and effectively manage water use.

"If you want to solve the world's very urgent, very pressing ecological challenges, the food system has to be a part of the solution," said panel moderator Jonathan Kaplan, the NRDC's food and agriculture program director. "Any way you cut it, food and agriculture is big. It's the elephant in the room."

The potential implications of using food metrics in the industry is huge. Worldwide, agriculture uses about 70 percent of fresh water supplies. Globally, up to 75 billion tons of topsoil are eroded every year.

"We have to figure out how to grow more food with fewer resources," Kaplan said.

One innovator that has embraced effective sustainability metrics is Del Monte Foods. 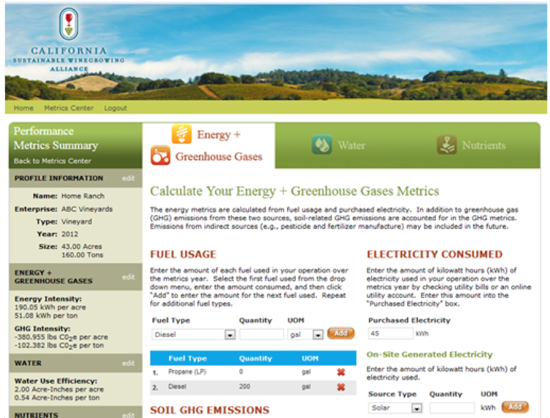 As one of the biggest U.S. producers and distributors of canned fruits and vegetables, Del Monte's sustainability policies and actions are watched closely. In 2012, the San Francisco-based company had year-end sales of $3.7 billion.

"It's really important to continue the pattern of what we've done at Del Monte," Connell said. "We still produce our own seeds, for the most part, we've done a lot in integrated pest management, and this [food metrics] is the next evolution in sustainability."

Connell gave an example of how Del Monte is applying pesticide metrics.

"Several years ago, Del Monte started doing and asking its growers and showing its growers how to use integrated pest management best practices," said Connell. "So IPM is only applying pesticide when there's an indicator of a pest. So you don't do it ahead of time or when you can, you do it when there's an indicator saying there's a pest in the way versus just spraying six times over a growing period."

When it comes to food metrics, patience is key, Connell said: "We have a large amount of contractor growers and the adoption rate is growing. It's not as fast as any of us would like, but I think we're going to get there. It just takes time."

Connell said that food metrics are grabbing a firm foothold with growers, but there are some reservations, particularly around the possibility of government intervention.

"There's a hesitancy coming in where [growers] are afraid that being transparent about their metrics or what they're doing in the fields will actually lend itself to more [government] policies," she said.

Connell said that Del Monte is excited by the progress it's seeing with growers.

"Farmers have been farmers for centuries and they've done a lot with a lot less land, so you have to give them credit for that. But, I think there will be a change with the next generation of farmers that are coming up and seeing how being more sustainable is better for their business."

SureHarvest is among the sustainable food management software companies offering a metrics calculator. SureHarvest president Jeff Dlott was among the speakers.

Panelists also said that with food metrics, unlike with other sustainability benchmarks and goals, companies and growers work in partnership on critical environmental efforts by using an agreed-upon measurements.

Also on the panel were Fred Luckey, chairman of Field to Market, and Tom Tomich, director of the Agricultural Sustainability Institute at the University of California at Davis.

Image of tomato with measuring tape by mashe via Shutterstock