Are companies prepared for $14 billion in water risk?

Are companies prepared for $14 billion in water risk?

The financial impact of water risk in 2016 has grown by more than five times since last year, but most companies aren’t moving fast enough to disclose and protect themselves from the damage of drought, waterway pollution and flood.

In 2016 alone, companies around the world may be facing $14 billion of water-related impacts from drought, flooding and increased water stress exacerbated by climate change, the cost of pollution and increased environmental regulation — compared with $2.6 billion in 2015.

The data was culled by CDP in its new report, "Thirsty Business: Why Water is Vital to Climate Action," presented at CDP’s Global Water Forum at COP22 in Marrakesh. CDP’s seven-year-old water program works with 643 institutional investors, representing $67 trillion in assets, to inform investments for a greener future.

More companies than ever have shown concern for water risk: 607 companies responded to CDP in 2016, a 49 percent increase in responsiveness since last year. Fittingly, companies are aware of a growing number of risks because of direct impacts to their finances. Over a quarter featured in the CDP report already have experienced serious water-related damage.

In 2016 alone, companies around the world may be facing $14 billion of water-related impacts from drought, flooding and increased water stress.

For example, in the U.S., General Motors spent $8 million due to increased water rates from drought conditions and hydro-electric costs. United Technologies Corporations disclosed that it invested $1.7 million in water-saving infrastructure in South California, now on the brink of what NASA warned could become a "decades-long megadrought."

"While the drought will invariably break at some point, we believe the likelihood of recurrence associated with climate change make a water constrained Southern California a permanent condition," United Technologies Corporations told CDP.

South African miner Gold Fields Limited reported a $92 million impact from the capital and operating costs of diesel-ﬁred power generation plants, which comprised 14.5 percent of its total capital expenditure. The company had to use diesel make up for the declining ability of its Ghanaian hydropower plants.

Overall, companies were affected by 4,416 water risks in the CDP report, and expect 54 percent of them to further materialize within the next six years. The most commonly cited impacts were:

This year’s findings offer two clear lessons for the private sector, said CDP CEO Paul Simpson. "Firstly, that water risks can rip the rug from right under business, posing a serious threat to bottom lines. Secondly, and crucially, water will be a fundamental global commodity in the transition to a low-carbon economy. Every drop of clean, sustainable water will be essential for the emissions reduction activities countries and companies have planned. This is a wake-up call to companies everywhere to take water more seriously.”

Even as companies wake up to the danger of both too much, too little water or polluted water at their doorstep, year-on-year trends show that actual corporate progress on water risk is almost stagnant. 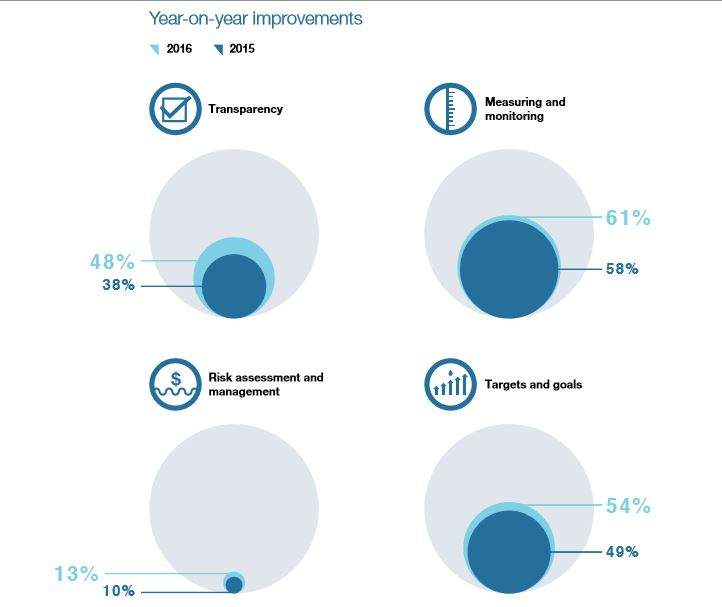 In 2016, 61 percent of companies say they track their water use, just 3 percent more than last year. And although the response to CDP’s water report was high in 2016, more than half of companies that CDP reached out to failed to disclose their attitude and actions towards water risk.

By sector, information technology (73 percent), consumer staples (58 percent), materials (54 percent) and health care (51 percent) had the highest response rate about water impact and stewardship. And all sectors but one, consumer discretionary, saw increased financial impacts from water this year.

"For a long time companies have taken water for granted as a free and plentiful resource," said Morgan Gillespy, CDP’s head of water and the report’s lead author. "But these assumptions are unravelling as the impacts of climate change gather pace. From the $100 billion worth of energy infrastructure at risk from rising sea levels in Louisiana, to Chinese industry facing tightening restrictions on water use, investors are right to worry about the impacts of water risks on their assets."

But are they doing enough? Most respondents to the water program (87 percent) assessed water risks, but only 13 percent of disclosing companies conducted company-wide risk assessments including direct operations and supply chains, up from just 10 percent in 2015.

Companies expect 54 percent of water risks to further materialize within the next six years.

More than a third of energy companies do not evaluate how water risk could impact their business in the future. The companies that persistently failed to disclose critical water related information to their investor shareholders via CDP were energy companies such as Exxon Mobile, Chevron and Royal Dutch Shell.

This is despite water’s enormous impact on the energy sector: About 70 percent of U.S. electricity comes from power plants that require water for cooling — and even less carbon intensive power sources such as biofuels, nuclear power, hydropower and even solar photovoltaics require some amount of water, at least for cleaning.

Furthermore, the report explained, a water-secure future is necessary to achieving low-carbon emissions and enabling companies and businesses to adapt to climate change: One in four companies’ GHG reduction plans depend on a steady supply of water, and more than half (54 percent) of companies said more efficient water use has led to lower GHG emissions.

Becoming water secure will require strategic change, the report asserted, and it will take a high level of internal engagement. For the second year in a row, CDP and sustainability firm South Pole Group highlighted an index of companies that achieved an A rating for their water scoring methodology based on disclosure, awareness, management and leadership.

Widespread corporate engagement is slowly growing across all sectors, but a set of companies are leading on comprehensive water management.

The companies leading in water stewardship aren’t ones obviously associated with heavy water use, such as beverage companies: Some firms that made it onto the 2016 A List were Coca-Cola European Partners, Colgate Palmolive Company and Ford Motor Company. Car companies Ford, Fiat Chrysler and Toyota were named for implementing best-practice water strategies.

For a full list of A List companies and case studies of those that are turning water risks into opportunities — and escaping significant water-related financial impacts — read the full 2016 CDP water report here.