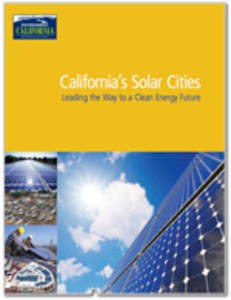 July, 2009
This report from the nonprofit Environment California charts the growth of solar power installations in California, and ranks that state's top cities for solar development.

From the executive summary of the report:

Solar power is a no-brainer energy resource for California. Cleaner than fossil fuels, safer than a nuclear power, and one of the most reliable sources of electricity, solar power is a critical part of California's clean energy future.

At the beginning of 2009, California was home to approximately 51,000 solar roofs, totaling more than 500 megawatts of solar power capacity. California has seen tremendous growth in the amount of solar power installed since 1999 when just 500 rooftops hosted a solar system, as illustrated in the chart below.

If California's solar market experiences a similar rate of growth over the coming ten years, approximately 45-50 percent of compound annual growth, the state will be on track to meet its million solar roofs goal by the start of 2017, as shown in the following chart. Assuming the industry is able to achieve greater economies of scale, due to increased experience from a growing market, the price of solar power should drop by half, creating "grid parity" for the solar photovoltaic market, meaning the cost of investing in a solar system is on par with the cost of purchasing retail electricity.

The vast majority of California's solar electric systems are on single family homes, typically as a retrofit project to an existing home. However, the number of California businesses, farms, schools, and government buildings hosting solar photovoltaic systems is on the rise, as is the number of new housing developments incorporating solar power into the home during construction.

This report combines data from all the state's solar photovoltaic rebate programs to determine which cities have the greatest amount of solar power. Data comes from the Public Utilities Commission's California Solar Initiative and Self Generation Incentive Program, the California Energy Commission's New Solar Homes Partnership and Emerging Renewables Program, and data from the state's municipal utilities such as Sacramento Municipal Utility District and Los Angeles Department of Water and Power (See About the Data section at end of this report for more details on the numbers analyzed for this report).