The Impacts of Climate Change on Wine in France 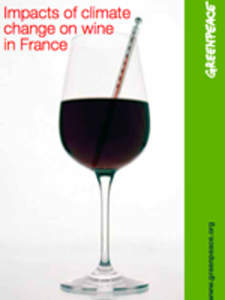 This report details how French wine production is a climatically sensitive endeavor -- and shows that it is at great risk from environmental change. For optimum quality each variety (like Chardonnay or Pinot Noir) is grown in specific regions within narrow climatic variability.

But the climate is changing now. The average annual temperature has significantly increased, leading to major shifts in the wine production calendar. The harvesting season is occurring much earlier than normal and higher temperatures are proving detrimental to the vines. Wines end up having higher sugar levels and alcohol content while retaining less acids - which means they are unbalanced with an overripe flavour and heavier texture.

In 2003, many French vineyards experienced these changes, producing grapes with these undesirable characteristics. Scientists predict that at the end of this century half of all summers could be like the summer of 2003. Other expected impacts are the increased risk of frost in spring, disease, and rotting.

These changes put France’s ‘wine producing pedigree’ at risk. Given current emission levels, we are on the path to an increase in temperatures of 4 to 6°C between now and 2100. Such a climate scenario would lead to a displacement of vines 1,000 km beyond their traditional limit.