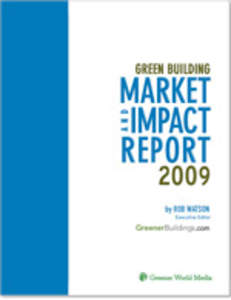 This second annual report, researched and written by Rob Watson, the "Founding Father of LEED," explores the impacts that LEED-certified buildings have already had on energy, water, waste and employee productivity -- and projects those impacts for the next 20 years.

According to report author Rob Watson, floor area registered and certified by the U.S. Green Building Council's LEED green building rating system in 2009 is estimated to grow by over 40% compared to last year's totals, for a cumulative total of over 7 billion square feet worldwide since the standard was launched in 2000.

Among the report's key findings:

• The estimate of reduced vehicle miles traveled (VMT) has grown to 780 million VMT to date versus 400 million in 2008. By 2030, the annual gasoline savings are expected to equal current U.S. imports from the Middle East.

• Annual carbon dioxide savings from LEED buildings is approximately 2.9 million tons from energy efficiency and renewables, a figure that is expected to grow to 130 million tons per year by 2020 and almost 320 million tons annually by 2030.

• Based on average materials costs, green building materials represented approximately $7 billion in cumulative spending through 2009, which is expected to reach a cumulative $230 billion by 2030. Moreover, the embodied energy in buildings that are renovated instead of demolished is expected to save as much energy in 2030 as we import this year from Saudi Arabia. In addition, an average of over 60% of construction and demolition waste was diverted from LEED projects, totaling 25 million tons to date.

• An average of at least 580,000 employees are currently enjoying improved indoor environments in LEED buildings at present, and the "green building workforce" is expected to approach 29 million by 2020 and almost 64 million by 2030. The productivity benefits from LEED buildings to date range from $230 to $450 million.

The report also assesses the impact of green building outside the United States. According to Watson, non-U.S. green buildings reached nearly 800 million square feet of registered projects in 2009, representing more than a fourth of all project square footage. Non-U.S. LEED projects could show a 30% increase in registration this year, thanks in large part to green building booms in China, India, and the Middle East. Green building is also growing quickly in Europe, notably Germany and Italy.