As hard as it can be for startup ventures to launch and get off the ground, they often need a little financial boost to get into orbit. Out of scores of submissions, two companies, Strawberry Energy and PrimoWind, were chosen by judges and participant voters as the most scaleable and pragmatic businesses for the 2014 VERGE Accelerate competition.

At VERGE, 15 CEOs and senior officers had two and a half minutes to pitch their companies to attendees from the main stage at the Palace Hotel in San Francisco. The 15 companies were chosen by GreenBiz staff and the GreenBiz community based on their video pitches submitted prior to the event.

The winners were determined by live SMS votes from people attending VERGE in person and online. The 12 pitches were divided into two groups, with the first group presenting Oct. 28 and the second Oct. 30. Two panel judges weighed in on each day at the conclusion of each round of pitches while viewers and attendees voted. 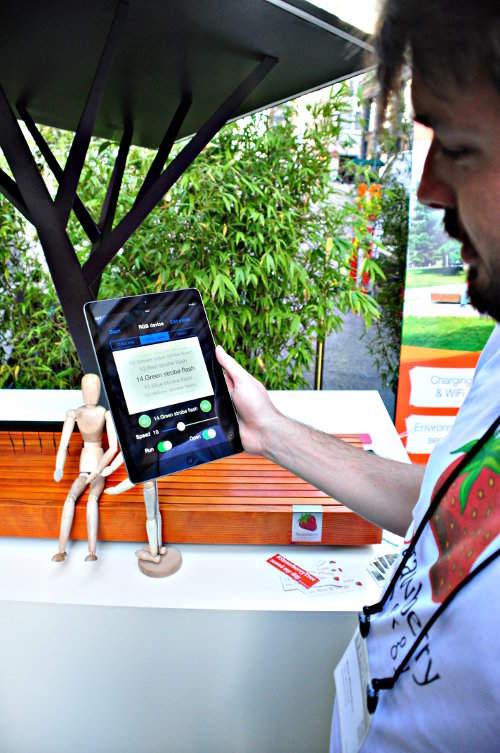 Strawberry Energy came out on top Tuesday after founder and CEO Miloš Milisavljević presented his company's innovation, the Strawberry Tree. The Strawberry Tree is a stand-alone solar mobile device charger that can be placed in parks and public spaces. The device features a large photovoltaic panel that sits atop a steel frame, and features LED lighting and speakers that can be controlled with an app via Wi-Fi.

Strawberry Energy brought a display model of its Strawberry Tree to VERGE, where attendees were free to charge their devices in an alley adjacent to the hotel.

Thursday's competition didn't go exactly as expected. Shana Rappaport, GreezBiz's director of engagement, invited online and on-site attendees to vote via SMS, as they had Tuesday. It appeared that the waste-to-resource firm PK Clean had won by one vote, with a total of 14 votes.

The Internet wasn't done, however. After the last-minute votes came in, PrimoWind came out on top and was declared the winner after the votes were tallied.

McMahon pitched the rooftop wind generation products that PrimoWind developed. McMahon said that Primo's rooftop units were bird-safe, silent, and had a unit cost of 30 percent less than solar PV panels for the same footprint.

While the 70-inch PrimoWind turbines can operate at windpeeds as low as 3.89 knots and can be installed on nearly any rooftop with enough space, McMahon said that he's really interested in high-rise and skyscraper installations. With fewer buildings and objects to break up wind patterns, installing the turbines atop tall buildings could see greater returns and yields due to higher windspeed.

Although they didn't win the competition, other contestants weren't slouches either.

Persistent Efficiency's CEO Jason Trager showed how his company's stick-on electric meter could be applied to a circuit breaker in seconds. He applied a meter to a breaker while speaking, and passed the breaker around the ballroom for attendees to see.

Angela Chen pitched her company, ProductBio, a service that researches supply chains for businesses, NGOs and government agencies at “50 times the speed for one-fifth the cost.”

Mark Peterman, CEO of OndaVia, showcased a water testing device the size of a shoe box that his company developed. OndaVia ships kits to cutomers that come with everything the customer needs to perform spectroscopy on-site, including a laptop with pre-configured software. The company also offers rental option for single-use projects.

PK Clean takes landfill waste and recycles the plastics into oil, at a cost of $25 to $30 per barrel. At the time of writing, Bloomberg reported the price of crude oil at $80.94 per barrel.

Ohmconnect is a web service that helps consumers reduce their electricity demand during peak hours. Using a program called Ohmhour, Ohmconnect actually pays energy consumers for reducing their energy usage. In his pitch, Duesterberg told a story of a woman in the eastern part of the San Francisco Bay Area who paid her two children's allowances entirely with the income from Ohmhour.

John Stonier, CEO of VeloMetro, gave an alternative view of how a city could implement an electric vehicle system. The vehicles — called velocars — have three wheels: two in front, one in back. VeloMetro's velocars don't require a driver's license, and are being designed with a sharing model in mind, resembling Zipcar and CitiBike.

Joel Atwater, chief technology officer of HydroRun, showed off his company's vision of hydroelectric power generation. Instead of using a dam, HydroRun puts turbines automated underwater vehicles, which harness the energy from a river's current, and can dodge boats and other objects.

Aviation-based company TerrAvion was represented by founder and CEO Robert Morris. Having served as the leader for a drone platoon in Afghanistan, Morris brought his knowledge of aerial observation to agriculture. His company flies manned aircraft (not drones, which he stressed in his pitch) over a farmer's crop to capture visual, near infrared, and thermal band imagery, so that the farmer can focus resources on the part of the crop that need the most help.

Bandwagon's CEO David Mahfouda showed off his company's ride-sharing app that makes use of existing taxi services. The app figures out who's going where, so riders can find a ride with someone heading the same direction.

Alan Mond, CEO of MuniRent, pitched a platform that brings the sharing economy to municipalities. Using MuniRent, cities can rent out equipment that isn't being used, and rent equipment that they don't have from neighboring cities.

Ian Ross, CEO of OppSites, also had a proposition for municipal governments. His company's service lets municipalies identifies lots, blocks or even districs that the city wants to improve. Investors can then search for propsed sites that meet their investment criteria.

Cities got yet more love with a pitch from Alicia Rouault, founder and CEO of Local Data. Local Data is a cloud-based platform for cities to build simple surveys. City workers can use the surveys to map characteristics of properties from the street, without having to use complex lookups for each address.

VERGE Accelerate winners: Where are they now?

Heard at VERGE: Highlights from the stage