How Big Data can give insight on ecosystems and save species

If you don't capture a picture of a leopard in a forest, does it really exist?

That's the problem for conservation workers and researchers are trying to solve, Conservation International's executive vice president and lead scientist M. Sanjayan said to the audience at VERGE 2014 in San Francisco. Researchers use camera traps as a way to capure images of vertebrate animals in remote places where human presence would drive the animals away. The problem with using camera traps is that they are labor intensive, and used to be unreliable.

"One individual could manage about 20 cameras. That's a lot of cameras. They wouldn't work very well, they'd trigger for the wrong reasons, sometimes they'd get eaten by a lion," Sanjayan said.

While the equipment has become more reliable, the new problem is that instruments such as camera traps and remote climate stations generate a lot of data. Conservation International enlisted the help of HP to deal with that data load in order to build both local and macro views of the status of remote environments.

Near the end of the talk, Sanjayan introduced the "Nature is Speaking" video series, which features beautiful footage of nature and narrations by actors such as Harrison Ford, Kevin Spacey, Julia Roberts, Robert Redford, Penelope Cruz and Edward Norton.

To help out Conservation International, send out a tweet (or retweet) with the hashtag #NatureIsSpeaking, and HP will give $1 to CI. 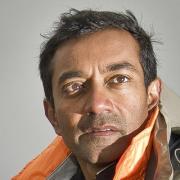 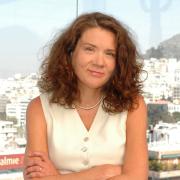