The Ocean Conservancy's CEO Janis Searles Jones is working on the longstanding mission of the organization of protecting the oceans, but with an ambitious new target: ending the flow of all new plastic into the ocean. With eight million metric tons of plastic flowing into the oceans every year — "a garbage truck a minute," Jones points out — stopping the onslaught is one of the most important and urgent priorities.

There's an innovative new project to do this: bringing together the private sector, the public and policymakers,  Ocean Conservancy is trying to stop the flow of all plastic into the oceans from its upstream sources on land by 2030. It's a "funny" place to be working for an ocean organization, Jones noted, but that's where Ocean Conservancy found that the most impact could be made.

Ocean plastic has come to the forefront as a major public issue, so now's the time for action, Jones says. 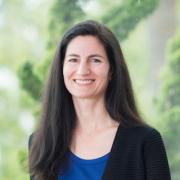