An estimated 1.3 billion metric tons of food is lost or wasted globally each year, according to the United Nations — about one-third of all the food produced for human consumption. Meanwhile, over 690 million people worldwide still went hungry in the last year. These two problems should seemingly solve themselves. Innovative circular economy models might be able to help.

In this talk, Jasmine Crow discusses how and why she started Goodr. One reason is that she wanted to serve people with dignity. After a viral video of her work serving food through her project called Sunday Soul ATL, someone asked about who donates the food. That question took her on a journey to learning more about the scale food waste. In 2017, that search led to launch of Goodr, which now serves multiple cities outside of Atlanta.

"We had two problems — food waste and hunger — that could literally solve themselves," she said. 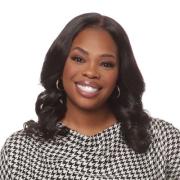