The domestication of plants was one of the most important innovations in human history. Agriculture made the availability of food predictable, and freed up labor for other pursuits, like art and technological development. Farming, by extension, has been the trade that has supported technological and economic growth over about ten millennia.

Matthew Dillon, director of Seed Matters at the Clif Bar Family Foundation and head of agriculture policy and programs at Clif Bar and Company is passionate bout the thing that makes farming possible: seeds.

"As a food company, Clif Bar realizes that all good food comes from good seed," Dillon said in a Studio C interview with GreenBiz's John Davies at VERGE 2014 in San Francisco. "As an organic food company, we recognize that we we need to keep improving organic seed for the needs of organic farmers as well as consumers."

There has been a lot of advancement in agricultural technologies since the industrial revolution, but Dillon said that not all of them have really been for the better.

"Over the last 50 years, plant breeding has directly led to a decline in nutrient value in 43 of our grains and crops," he said.

And those crops, Dillon was quick to point out, aren't the product of the past hundred years, either. It took a long time to get from wild plants like wheat and rice to the domestic varieties we have today.

"It's important for folks to remember that our agricultural crops we have today were developed over a 10,000-year period," Dillon said.

By manipulating gene frequency through selective breeding, crops have changed over time, just as humans have.

"We've evolved with these crops. We as farmers and gardeners have been innovators for 10,000 years," Dillon said. He continued to note that the rise of patent laws and seeds that have to be bought instead of saved, farmers have lost control of the innovation in the food supply. The organic movement, he said, is helping farmers take the power back from seed suppliers.

"It's important for farmers to return to their traditional role as seed innovators," Dillon said. 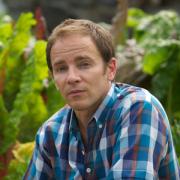